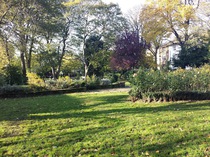 1. Community Activities
A number of community activities have been organised in the Square by the BSRA and others during the year and neighbours are now getting to know each other better, fostering a greater sense of community. More activities are planned for the coming year.

2. Pavement
The Association has successfully campaigned for the replacement of the asphalt pavement on the north and south sides of the Square with York stone paving which has improved the safety and greatly enhanced the character of the Square. The Council has agreed to replace the pavement on the west side when the development work at number 16 Barnsbury Square is complete.

4. Improvements in the Square
The Association has been very actively engaged in negotiations with the Council for improvements to the Square, especially regarding cleanliness and safety in the garden square for all groups of users including children and the elderly.

In response to requests from residents, some of the lower branches of the mature trees in the Square have recently been pruned by the Council.

A temporary Park Keeper has been appointed by the Council to help with gardening and to encourage responsible behaviour within the Square.

At our request, the Council is looking into a budget for stripping and preparing the railings for painting. It has been agreed that local residents will help paint the railings under the supervision of professionals. We could hold a community event for this activity.

5. Community Gardening
The plants in the Square are looked after by the Council and the Friends of Barnsbury Square.   Residents are warmly invited to help at the monthly community gardening sessions organised in conjunction with the Friends and the Council. A number of residents are already involved with this.

6. Development in the Square
The Association has been actively involved in monitoring closely the development at number 16. Works at 16 Barnsbury Square are due to commence in the next few months. The construction team is producing regular newsletters for neighbours which can be obtained by email.

The BSRA is monitoring proposed changes and minor alterations to the planning application so that collective action can be taken, if necessary, to avoid un-sympathetic alterations. 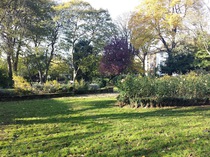 [details and short history of the Square etc]

Election of new committee members:  Any volunteers who can help with the Resident’s Assoc very gratefully received!

You’ll have also seen the new planting in the borders.  This is funded by The Friends Of BSq and most work is done by volunteers and any help with the various ‘planting’ days is gratefully received.  Bring the kids.  No experience necessary! Email friendsofbsg@aol.com for details.